What’s the deal with cell phones, wireless and pregnancy? Can being exposed to EMF radiation while in utero lead to ADHD, cognitive dysfunction and behavioral problems? One top doctor shows it can.

While the latest and greatest new gadget is exciting and trendy, I always wonder how it impacts our health, especially that of a vulnerable, developing baby. No one ever discusses health implications when a new phone or wireless gadget hits the market, because we are way more focused on all the cool things it can do. It’s no secret that technology evolves at a super fast rate, but the human body does not. We are adaptable, but how adaptable? We can be exposed to a lot of potentially harmful things and be fine, but how much is too much? This is one reason I always tell pregnant people to minimize cell phone use, exposure to Bluetooth and wireless, and if they use our ZENBands for hypnobirthing, plug into a cheap Mp3 player. Better safe than sorry.

Today I’m excited to talk to Dr. Hugh Taylor, a highly accomplished doctor and researcher who conducted a randomized controlled trial on the effects of cell phones on pregnant mice. While mice aren’t human, they are biochemically and genetically very similar. Dr. Taylor is the chief of Ob/Gyn at Yale New Haven Hospital. He is a graduate of Yale College and the University of Connecticut School of Medicine. He completed his residency at Yale, followed by a postdoctoral fellowship in molecular biophysics and biochemistry at Yale and a fellowship in reproductive endocrinology and infertility. Dr. Taylor is the editor-in-chief of the journal Reproductive Sciences and editor of Endocrinology. He serves on the board of directors of the American Society for Reproductive Medicine (ASRM) and is on the governing council of the Society for Gynecologic Investigation (SGI). Erin: Can you tell us about the study you did on pregnant mice and cell phones and the key findings?

Dr. Taylor:  Sure. We had two groups of pregnant mice and put cell phones on top of their cages. One phone was always on, and always communicating with a cell phone tower. The control group used a cell phone that was plugged in, but it was not communicating with a tower, so it wasn’t getting any radiation. But it used the same charger, cord, and had the same set up. The active phone was silent and muted, to make sure noise didn’t interfere with the findings or stress the mice out. It was well-controlled. We exposed the pregnant mice throughout the entire pregnancy, and saw some pretty dramatic findings in the offspring. Behavioral wise, the two groups were quite different. In the active cell phone group, the offspring had significant memory reduction. They were more hyper-active, and less fearful about it. In other words, they were forgetful and bouncing off the wall, but didn’t have a care in the world. The closest thing that we think it resembled is Attention Deficit Hyperactivity Disorder. We tested on various cages too, to make sure the cage itself didn’t create a difference.  What we were looking at was fetal brain development, the time we think the brain is most vulnerable and most sensitive to exposures, much more so than adult brains. Only fetal brains were exposed to the cell phones, and we removed the phones after birth.  Then we studied the behavior of the mice at all ages, and the differences existed for all the time frames, meaning they behaved differently throughout the duration of their life.

Erin: You also took tissue samples and did pathological studies?

Dr. Taylor:  Yes, we took the brains out, tested some of the neurons and showed that the electrical currents in the brains between groups were different. The synapses fired differently, so there were different electrical potential across the cells. This tells us why they have these different behaviors because there really is different wiring in the brain. Again, these mice weren’t exposed to cell phones after birth. So our findings are related to exposure only during birth. The prenatal brain was permanently altered and programmed differently throughout life.

Erin: The effects remained the same throughout the rodent’s lifecycle?

Dr. Taylor:  It did not dissipate. We looked at the effect of aging, though we haven’t published those findings yet, so I don’t want to go into details. Suffice to say that at any point, at any age, the difference remained when compared to the control group. Also, this isn’t an all or nothing response. It’s a dose-related response, which means limiting cell phone exposure can have a significant positive effect. Not using the cell phone 24 hours a day would probably be helpful.

Erin: Can you think of any anecdotal evidence or case studies in humans related to this, that you can talk about?

Dr. Taylor: There is more than anecdotal studies. I referenced one in the paper if you have that (Reference 11) . There are a lot of studies that show that women who were pregnant and lived near cell phone towers or talked a lot on their phones during pregnancy were more likely to have children with behavioral problems. The issue of that is, is it an association? It doesn’t prove cause and effect. The first critical response is usually, “Well of course they have kids with behavior issues! They are always on the phone and not paying attention to their kids.”  You always have to worry about those confounders when an association is all you’re finding. In the mouse study, the critics would say, “Well it’s a mouse, it’s not human,” but I think you need to pay attention when all the evidence is pointing in the same direction. The mouse study was carefully controlled.  The mice are genetically the same, eat the same diet are in the same cages and exposed to the radiation for the same length of time.  The only difference between the two groups of mice was the cell phone exposure, so you know that’s cause and effect, whereas in the human studies, there are so many variables you can’t control for. But when a carefully controlled animal study and the human studies are saying the same thing, that’s pretty compelling evidence, in my mind, that the association is strong.

Erin: Did you notice any other health effects besides behavioral ones, like cancers., etc?

Dr. Taylor: The NIHS has done better studies on other health effects of cell phones. In our study, there wasn’t an increase in cancers, but we really didn’t have enough mice to evaluate those types of effects. You need a bigger study to do that, and we weren’t powered adequately to do that. So it’s not surprising we didn’t find that.

Erin: From a practical perspective, what should pregnant women do to minimize their risk?

Dr. Taylor: The first thing is this: It’s pretty clear that cell phone exposure can be harmful, but it is a dose-related response. So limit your cell phone exposure. Don’t talk 24/7. More importantly than that, don’t keep your cell phone right next to your abdomen where your baby is growing. The cell phone intensity drops quickly and is related to the square of the distance between you and the phone. So going from 1 foot to 2 feet away would be a quarter of exposure and 10 feet would be 1/100 of exposure. So it drops very quickly.  I tell people very simple things, like at night, don’t have your cell phone on your abdomen or your pillow. Use wired headphones. Turn it off or put it somewhere else, like on a table or desk on the far side of the room. Simple things. It’s important to remember that the cell phone is constantly communicating with the cell phone tower and always giving off radiation and sending out signals whether you are talking on it or not.

Erin: And during the day?

Dr. Taylor:  A lot of women carry their phones in a purse, their pockets and have it by their side.  Just get it away from your abdomen. It’s a simple thing.

Erin: Are you doing more research in this area?

Dr. Taylor: It’s tough to get funding, but in the future, there will be more papers that come out on this topic from our group.

Erin: You see kids getting diagnosed with ADHD at younger and younger ages. Do you think this type of cell phone exposure has anything to do with that?

Dr. Taylor: It sure may. There are probably a lot of reasons for that. I’m not an expert in that field, but that is what we’ve seen in the epidemiologic evidence and animals. That is the closest diagnose. Hyperactivity, inability to concentrate, reduced memory…, exactly the type of the thing we were seeing.

In summary, guys, I’m posting the below graphic for ways you can minimize your exposure to EMFs. Also check out my Causes Or Cures podcast on which I interview top researchers on how EMFs are impacting our health in other ways. Worth a listen! 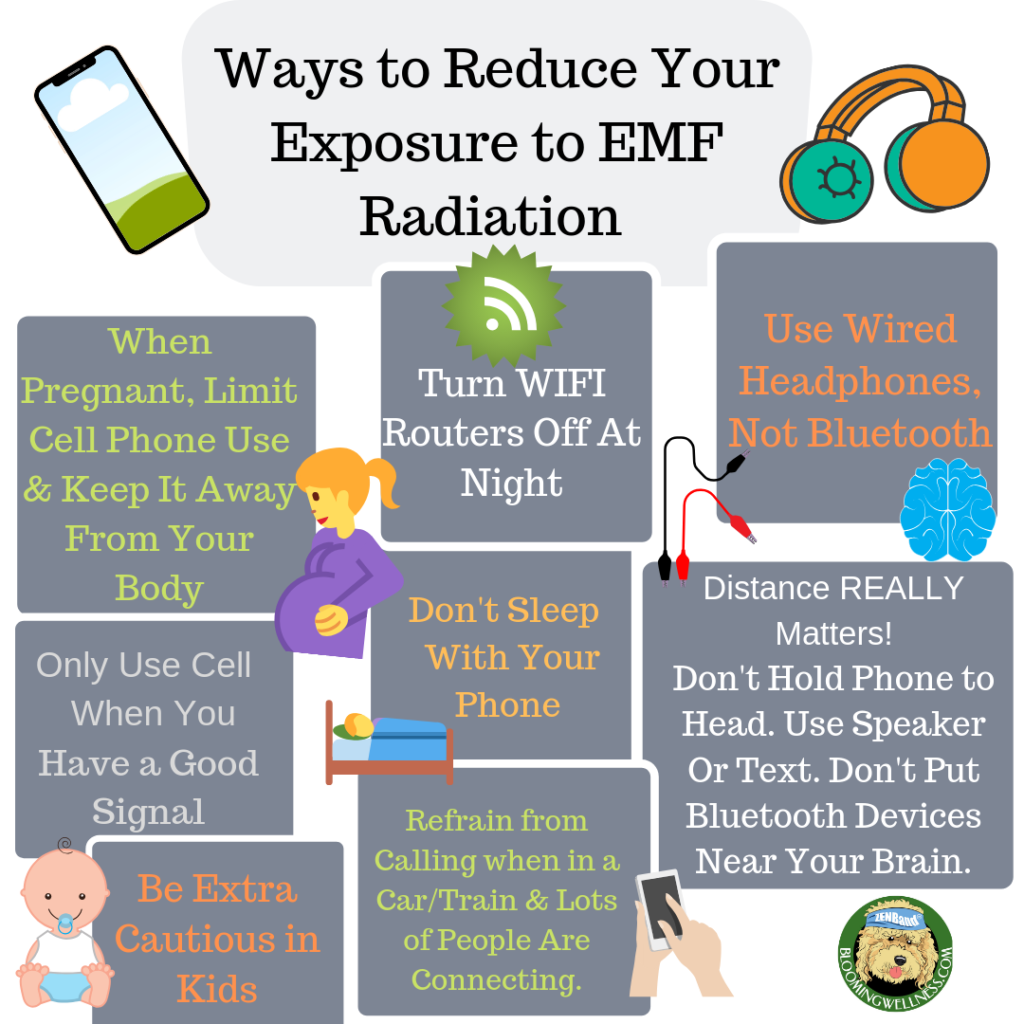